Mother Nature knows what we’re doing, and she’s not happy.

As readers of this blog will know, this summer I’ve taken classes covering everything from learning wilderness survival skills to investigating my spirituality to understanding the principles of permaculture.

All of these classes have a common goal: they teach those of us who live in a modern urban technological society how to better appreciate and coexist within the natural world.

Recently the idea of understanding and respecting nature was reiterated in an article on Truthout.org, You Can’t Kill a Planet and Live on It, Too by Frank Joseph Smecker and Derrick Jensen.

They point out that our society has succumbed to a fantasy shaped by television, social media and pop culture, and is largely blind to the reality that our modern culture is possible only through the exploitation and destruction of the ecosystem in which we live. Worse, this fantasy causes us to not only resist change or struggle, but makes us to want to fight to protect the bubble of artificiality that we find ourselves in, even as the cost to the planet makes such a lifestyle unsustainable.

According to Derrick Jensen,

If your experience is that your food comes from the grocery store and your water comes from the tap, then you are going to defend to the death the system that brings those to you because your life depends on them….

Many Americans cannot fathom a life where every bite of food they consume comes neatly packaged and sanitized. I’ve even heard stories of children who are so far removed from where their food comes from that they don’t even understand at the most basic level the connection between meat and living creatures.

If your experience, however, is that your food comes from a land base and that your water comes from a stream, well, then you will defend to the death that land base and that stream. So part of the problem is that we have become so dependent upon this system that is killing and exploiting us, it has become almost impossible for us to imagine living outside of it and it’s very difficult physically for us to live outside of it.

I realized upon reading that quote just how true it is for myself, as I struggle through wilderness survival classes. It’s not easy to be outside for 48+ hours straight in 100° weather, eating nothing but food you’ve foraged or caught yourself. It’s so much easier to just get in the car and hop over to a chain restaurant for a steak, potatoes and beer.

Easier, yes. However, the sad truth is that in our modern society we have become so disconnected from our sources of food – our very source of life – that we don’t know where it came from or what may be inside it. Most people don’t want to know that their steak was once part of a hormone-injected cow that was fed slaughterhouse by-products as it was processed through a feedlot (and they don’t need to because it now comes sanitarily wrapped within styrofoam and plastic); the beer was made in a giant factory brewery using products sprayed with pesticides; and the genetically-modified potatoes were grown 2000 miles away using the best technology agribusiness can provide. How is it that we not only ignore these concerns (and try to pretend they’re not real), but as a society we actively work to protect the continuation of this form of food production?

Jensen argues that people naturally become afraid when they think their lifestyle is on the line and they have something left to lose, and as a consequence, will fight to protect what they have. As he puts it,

I really like my life right now, as do a lot of people. We have a lot to lose if this culture is to go down…. I’m really unsure how many of us would be willing to give up our automobiles and cell phones, hot showers and electric lights, our grocery and clothing stores.

I’ll be the first to admit that I can’t stand the thought of having to give up my iPhone, my internet connection, or my lovely blue Honda Fit. I enjoy my Netflix TV breaks, and there’s nothing like being able to wash clothing and dishes with little more effort than pushing a button. These are ‘conveniences’ that enhance my life and make a lot of things possible.

At the same time, I also struggle with the true cost of these conveniences:

… the truth is, the system that leads to these things, that leads to technological advancement and our identity as civilized beings, are killing us and, more importantly, killing the planet.

That’s the key to Jensen’s argument: that as we consume more and more, faster and faster, our lives may become better… but it’s killing the earth, and if we don’t change our ways, we may either run out of “stuff” or destroy the very source of the stuff itself.

It’s a dilemma that’s hard to even wrap your head around. How do you “opt out” of a destructive system when that system makes up everything you know in your personal world, from the food you eat, to the clothes you wear, to everything you do or use on a daily basis? 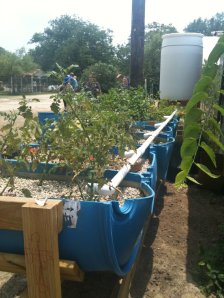 These thoughts were swirling in my head, in fact, when a few days ago I took Paul Range and Gloria Haswell’s first Permaculture class taught through The Human Path.

As they explained, the idea of permaculture, as set forth by people such as Bill Mollison, David Holmgren and others, is living in a sustainable, self-sufficient way that is respectful and caring of the natural world around us. As Mollison taught, permaculture assumes three basic ethical standards:

As human beings who must share this planet with each other and with the natural world that feeds and shelters us, we need to recognize our obligation to live in cooperation with that world; this means that sooner or later the human race must come to abide by some version of these ethical standards or risk our own extinction.

On the surface, it seems simple enough. After all, I doubt many people would endorse the wholesale slaughter of porpoises and sea turtles in the Gulf of Mexico, yet who among us doesn’t complain about the price of gas going up a dime. The truth is, by participating in our modern consumer culture, we are complicit in everything from the destruction of natural habitats to get the necessary minerals for our computers, the erosion of the soils in the American heartland in order to have inexpensive flavor enhancers (high fructose corn syrup) in nearly every cheap food product, or the promotion of child labor in Asia to produce cheap dohickies we buy, use once and then toss in a drawer.

These are hard truths to face. Yet as much as it hurts, as much as we’re going to go into this realization kicking and screaming, we have no choice but to accept that the world’s resources are finite. All the stuff we have now, that we take for granted – it all comes at a cost. As many are predicting, that cost will soon be even greater, both to the planet and to our pocketbooks. As we accumulate more and more, and as our expectations for everything to be more plentiful and inexpensive, if we don’t do something to change the system, we may cause the whole system to break down to the point where some of it may soon not be available AT ALL.

So what do we do? Revisiting the idea of self-reliance and self-sufficiency, we need to live more within our means, and produce at least some of our needs ourselves. That can include food in the form of gardening and backyard livestock; clothing that we make ourselves; solar or wind energy to power our homes (and our devices!); reducing our personal reliance on oil through more human-powered transportation; recycling; and so on. I don’t really need to make a list, as we all know this stuff already. It’s not knowing it that’s important… it’s doing it.

And if we act now, maybe Mother Nature won’t take all of our toys away from us.