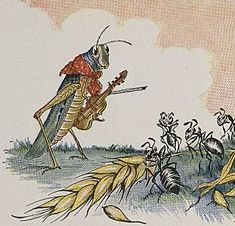 Most people know the story, from Aesop’s Fables, that tells about how the grasshopper sat around all summer and played his fiddle while the ants furiously worked to save up food. The grasshopper said, “there’s so much abundance and it’s so warm… why do you work so hard when you could be enjoying yourselves?” The ants, however, said that they wanted to prepare for when times were tough and the winter came and there was no food, but the grasshopper just scoffed at them and said that would never happen. Sure enough, winter came, and since he had been lazy all summer, the grasshopper had no food or preparations. While the ants were safe and snug in their homes full of food, the grasshopper died.

The story reminds us that tough times may come for us too. Those of us who have stored up food, water, supplies, fuel, and so forth – the ants, as Jack Spirko of The Survival Podcast calls us – will be able to survive a lot longer than those who ignore the possibility that they might face hard times – the grasshoppers.

As much as we hate to contemplate it, there’s a very strong likelihood that within the next few years the US will experience a significant financial crisis. On a recent episode of The Survival Podcast, Karl Denninger talked about the impending economic depression that he and many others believe is inevitable (unless there are immediate, dramatic economic policy changes). In the podcast Denninger talked about his concern for social order if the bottom drops out, and suggested that when things get tough, a lot of the population might turn ‘feral’, desperate for survival.

And that made me think about zombies. In the movies, zombies are mindless bloodthirsty shells of former humans, driven only by the need for ‘brains’.

Then I made the connection. What if zombies – real zombies – are the grasshoppers?

Think about it. Right now, there are lots of people who think preppers are crazy. They spend money with abandon, go deeply into debt, live life for today without planning for the future. Most people, in fact, have at most one week’s worth of food in their homes. They can’t envision a time when they can’t buy what they want, fill their cars with gas, eat at fancy restaurants, buy designer sunglasses, or whatever.

But everything changes if a disaster strikes – or if everyone is broke and can’t buy food. Everything.

Imagine what would happen if we do enter a full-blown depression and skyrocketing unemployment (which some communities are already experiencing but is not yet widespread). Imagine someone deeply in debt, without the money to buy the heavily inflated prices on food and other basic commodities. What lengths will they go to in order to survive? What would you do?

I fear a time when there will be lots of people on our doorsteps trying to get what you have. They will be desperate, mindless, unable to follow reason, unstoppable.

That’s when the grasshoppers turn into zombies.

Or to put it another way – the zombies will be the ones who didn’t take care of themselves when they had a chance, and will come after the rest of us.

2 thoughts on “Ants, Grasshoppers… and Zombies”