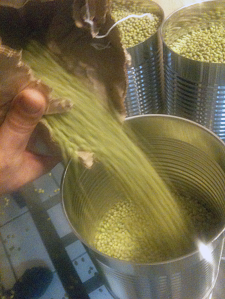 [Note: on 12/11/11 I learned that the following news was a hoax. See the survivalistblog.net explanation and Oath Keepers retraction for more information.]

According to Oath Keepers (an organization of military members, veterans, and law enforcement personnel), federal agents have been observed demanding customer lists from Mormon canneries, the places that allow both LDS members and non members to purchase bulk food supplies and can them in #10 cans.

The man that manages the facility related to him that federal agents had visited the facility and demanded a list of individuals that had been purchasing bulk food. The manager informed the agents that the facility kept no such records and that all transactions were conducted on a cash-and-carry basis. The agents pressed for any record of personal checks, credit card transactions, etc., but the manager could provide no such record. The agents appeared to become very agitated and after several minutes of questioning finally left with no information. I contacted the manager and personally confirmed this information.

As previously documented on Surviving the Modern World, several friends and I have been occasionally canning dry goods for long term storage. We don’t do it because we’re religious zealots or apocalyptic wingnuts; we do it because it’s frankly a good idea. If money’s tight, or the weather goes awry, or some sort of disaster hits, we’re not going to starve in the short run. We’re hardly criminals or dangerous elements in society.

But it doesn’t matter now. From the sound of it, the US Government isn’t taking kindly to its own citizens being prepared for emergencies. Rand Paul – someone I haven’t ever really taken seriously before – pointed out recently that according to the provisions in the National Defense Authorization Act for Fiscal Year 2012 that just passed in the Senate a couple days ago, you can get labeled as a domestic terrorist if you have more than seven days of food in your house. And if you’re a terrorist, you can be detained indefinitely without trial.

Law-abiding, responsible citizens are going to be considered troublemakers – nay, TERRORISTS – because we are prepared?The US Government is trampling on our Constitutional rights in the name of fighting terrorism, and they seem to be able to get away with it. This is getting crazy… and it’s pissing me off.

I’m not a tinfoil-hat wearing conspiracy nut, but I have to wonder why the government is so concerned about people with food storage. Do they know something we don’t know?

And since it’s not yet illegal to have more than seven days’ worth of food, I’d like to issue a call to action to all of my blog readers and your friends – start storing food. Find your local LDS church and ask them about their cannery. Go to Costco, Sams Club or whatever and buy canned goods and stash them. Learn how to use a pressure canner and start preserving your own fruit, vegetables and even meat. Or order pre-canned foods through various online merchants. I personally like Thrive dehydrated and free-dried foods sold through Shelf Reliance.